The Financial Stability Advisory Group (FSAG) met on 29 December 2021. The meeting was chaired by the Minister of Finance and Economy, and was attended by Governor of the Bank of Albania (BoA), Chair of the Board of the Financial Supervisory Authority (FSA), Director General of the FSA, Director General of the Deposit Insurance Agency (DIA), as well as other representatives from these institutions.

The agenda focused on the most recent assessments by the present authorities about the developments in the institutions and markets they supervise.

In its presentation focusing on the assessment of the banking system’s financial situation during 2021, Bank of Albania highlighted that the developments were positive and reflecting the resilience of economy against the impact of the pandemic. Financial markets functioned smoothly, with interest rates remaining at low levels and showing little volatility. The banking sector expanded its activity considerably, on the back of strong deposits growth that were routed toward interbank, securities and loan investments. The non-performing loans fell to around ALL 41 billion, driving the non-performing loans ratio down at 6.2% in November 2021. Solid credit growth also gave a contribution in the drop of non-performing loans ratio. Market risk indicators did not show pronounced changes over the year. Banking sector’s capability to withstand risks is assessed as strong, as the liquidity situation is very good and the banking activity is profitable and well capitalised. The continuous improvement of credit quality, months after the expiration of the supportive regulatory measures of the Bank of Albania, is encouraging. In spite of it, during 2022 the Bank of Albania shall pay special attention to the analysis of non-performing loans through dedicated supervisory actions in the banking sector.

In the framework of systemic risks analysis related to the structure of the economy, Bank of Albania presented an analysis constructed on the national financial accounts and the interconnectedness between the institutional sectors. The Albanian economy has a net debtor position to the rest of the world, given that liabilities are higher than assets. This position is affected by the negative net positions of non-financial corporations (enterprises) and of the General Government, while the positions of households and financial corporations provided a positive contribution. Based on this structure and by assessing the financing flows among sectors, indicators that evidence the risks arising from certain sectors’ position may be constructed. Further, in order to control these risks, measures in the framework of economic and financial policies may be taken to reduce the negative net positions. The Bank of Albania is carrying out this analysis not only for the institutional sectors of the economy but also for the main segments of the financial system. In this context, the FSAG members assessed that the interinstitutional collaboration for this purpose would be very useful.

The excessive use of foreign currency in economy, frequently as a means of payment, remains one of the important sources of financial risk and reduces the effectiveness of economic and financial policies. For this reason, the FSAG members discussed on the need and possibility that measures to reduce the use of foreign currencies and strengthen the use of national currency, currently concentrated in the banking sector, are also envisaged carefully for the real sector of the economy. In this respect, members in this meeting are committed for institutional collaboration, which may be also assisted by the expertise sought from the international financial institutions.

FSA acquainted members of FSAG with the developments in the legal and regulatory framework, as well as with the performance of the financial markets that FSA supervises. In the framework of enhancing convergence with the best standards in this field, the FSA representatives highlighted the approval of some important laws, including: “On compulsory Insurance in the transport sector”; “On capital markets”; “On collective investment undertakings”; “On financial markets based on distributed ledger technology”; and the preparation of the draft-law “On private pension funds”. The work on drafting the related by-laws has progressed. The presentation evidenced developments in voluntary pension funds, investment funds and retail securities market. In the latter, dominate the transactions between households and the preference for short-term securities of government debt. Regarding the insurance market, FSA representatives pointed out the increase of gross paid premiums over the year but also the more rapid growth of indemnities. The compulsory vehicle insurance dominates the market structure, having the highest share in gross written premiums. Overall, these financial market segments have shown resilience and solid activity growth despite of pandemic impact. Furthermore, the FSAG members discussed on issues related to inter-institutional collaboration for improving the functioning of such markets.

DIA’s representatives regularly participate in FSAG meetings. In this meeting, DIA’s representatives presented the performance of deposits at banks and savings and loan associations (SLAs). Over 2021, the insured deposits grew in both banks and SLAs. In total, households’ savings continue to dominate the insurable deposits, with foreign currency deposits accounting for slightly more than half of the latter. By maturity, time deposits dominate the insurable deposits of households, while deposits of entrepreneurs and commercial companies are concentrated in current accounts. In line with the performance of insured deposits, the deposits insurance fund was up over the previous year. The payments of deposit insurance premium by banks and SLAs as well as the management of financial assets by DIA were the financing source of the insurance fund over the previous year, as laid down in the law under normal situations. Given the pandemic conditions and taking a cautious approach, DIA strengthened these sources with the credit line made available from the European Bank for Reconstruction and Development and guaranteed by the Government of the Republic of Albania.

After the discussions of the issues set out above, the senior officials of the institutions assessed positively the developments in the financial system, in financial markets and in the relevant regulatory framework, by affirming the stability of the financial system. The pandemic did not affect this stability. They emphasised the importance of monitoring the financial developments, as both the economic situation and the public health are facing continuous challenges.

At the conclusion of discussions according to the agenda, the senior officials representing the participating institutions approved this press release and authorized its publication. 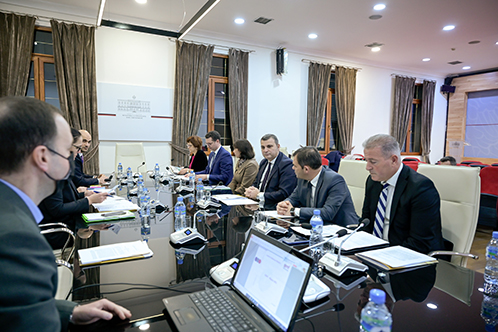