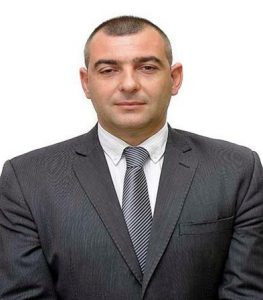 Mr. Donald Duraj was appointed Chairman of the Board of Directors of the Deposit Insurance Agency in 2015.

He has a progressive career of more than 15 years in the banking system, an integral part of which have been quite active and successful achievements within various prestigious local financial institutions and those in the international network such as Austria, Poland, Slovakia, Ukraine and Belarus.

From 2010 to 2015 Mr. Duraj was Head of Commercial Organization and Market Development Sector at Societe Generale Bank in Albania playing a key role in the strategic direction, short-term and long-term planning, setting key objectives, coordinating inter-divisional and inter-institutional relations, locally and internationally, with public and private companies, et cetera.

During this period Mr. Duraj has successfully led at least 15 projects, among the most important ones for the Bank, and with a direct impact on the expansion of activity in the local market and with an increase in profitability.

Mr. Duraj has graduated at the Faculty of Economics, Department of Finance, Banking Profile, at the University of Tirana.